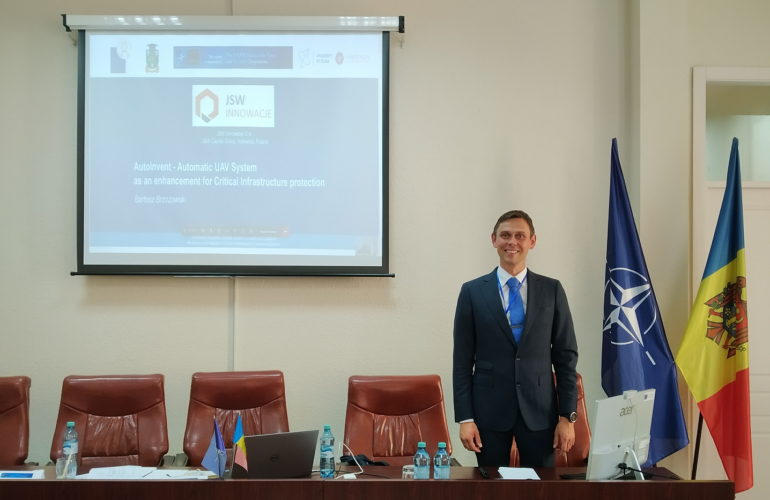 SUCCESS OF THE POLISH DRONE AT THE NATO CONFERENCE

On June 1, 2022, a representative of JSW Innowacje S.A. dr inż. Bartosz Brzozowski spoke at the NATO conference in Moldova devoted to modern technological solutions. He presented the AUTOINVENT aerial system, enabling the automation of volume measurements and the development of three-dimensional terrain models. However, it was not an “ordinary” presentation. During the show, the AUTOINVENT Project Manager – Bartosz Brzozowski launched the unmanned aerial vehicle and carried out one of the planned missions. The drone performed the planned start and measurements and landed in the aerodrome. Everything happened in real-time. Interestingly, the drone and the aerodrome were located … at one of the airports near Warsaw.

NATO’s Science for Peace and Security (SPS) program, under which the conference in Moldova was held, aims to promote dialogue and cooperation between NATO member states and partner countries based on research, technological innovation, and knowledge exchange. The SPS program offers financing, expert advice, and support tailored to the needs of activities related to civil safety. All in line with NATO’s strategic goals. The conference was attended by representatives of all NATO members and partner countries.

The presentation of the AUTOINVENT system, its start, execution of the planned mission, and landing, caused a stir among the conference participants. Mainly because the whole process was controlled in real-time by one person at a conference in Moldova. Everyone watched the flight “live”, while the Project Manager of AUTOINVENT Bartosz Brzozowski explained the intricacies of the entire system and, importantly, modified the flight plan on request, obtaining an appropriate response from the system. This is a great success for the Polish company JSW Innowacje S.A., which caused a stir among the participants of the conference.

The AUTOINVENT system is fully automatic. This means that the drone performs all scheduled missions periodically and independently. Of course, the prevailing weather conditions are very important. This flying platform, which is currently used for calculating the volume of stored raw material, can be adapted to the observation needs and protection of critical infrastructure by changing the measuring head. The aerodrome, which allows for the full automation of the drone take-off and landing process, and to hangar the drone between flights, was also greatly admired. Polish engineers from JSW Innowacje S.A. were able to ensure constant and unchanging climatic conditions inside the aerodrome, necessary to maintain the security of electronic modules. The weather conditions at the place of measurement or mission execution are constantly monitored by the weather station, which is an integral part of the entire system.

The AUTOINVENT system has the possibility to fully automate the process of transfer and acquisition of the collected data. Two virtual machines have been implemented especially for the system: the first one is designed to process data collected during the mission using software that allows for photogrammetric processing of the taken photos, and the second one allows for analysis, cataloging, and sharing data with the end-user.

All the capabilities of the system were presented at the NATO conference in Moldova. Presentation by dr inż. Bartosz Brzozowski turned into a great success for the Polish company and Polish engineers created a system with a very large number of practical applications, which was discussed by almost all conference participants. The interest in the AUTOINVENT system after the presentation was enormous, as evidenced by a large number of questions and suggestions for further applications among speakers from other NATO member states.